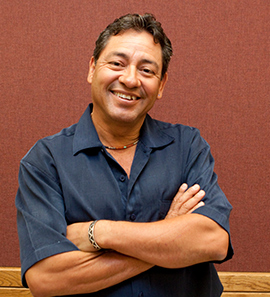 Dr. Edward Castañeda’s research investigates plasticity in presynaptic mechanisms that modulate neurotransmitter release during changes in behavior due to neurodegeneration or substance abuse. It is interesting to speculate how fundamental mechanisms that govern learning and memory might serve for compensation in surviving dopamine neurons of the brain compromised by Parkinson’s disease and how these same mechanisms might play a role in the sensitization of dopamine neurons by repeated exposure to stimulant drugs. Currently funded research seeks to understand how sensitization of amphetamine-evoked dopamine release may produce cross-sensitization to stimulant drug-conditioned environmental cues or stress. To accomplish this, Dr. Castañeda incorporates in vivo intracerebral microdialysis to collect dopamine overflow evoked by drug and electrical stimulation of dopamine pathways. Understanding the principles of cross-sensitization will provide insights regarding drug craving and recidivism in recovering addicts. His contributions have helped to expand the representation of underrepresented populations in the neurosciences by taking active roles in community, academic, state and federal programs. Dr. Castaneda has served as PI for the NIH/NIDA UTEP Vulnerability Issues In Drug Abuse research-training program. In this role, he provides oversight to a 3-college multidisciplinary project that investigates the relationship between drug abuse vulnerability and cultural factors, socioeconomic challenges, and neurobiological mechanisms. He has received recognition for his mentoring contributions from the National Hispanic Science Network on Drug Abuse and the Arizona Association of Chicanos for Higher Education.