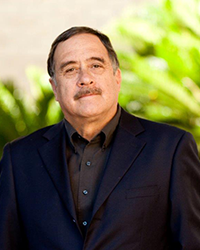 Dr. Avelardo Valdez is currently the principal investigator and Director of the IRTI. Prior to his leadership of the current IRTI program, Dr. Valdez directed during the course of ten years the National Hispanic Science Network Summer Research Training Institute on Hispanic Drug Abuse.  The institute was a precursor to the IRTI program that was focused on promoting interest and professional commitment to Hispanic drug abuse research among students and early career faculty, earning him the NHSN National Award of Excellence in Mentorship. Dr. Valdez is the Cleofas and Victor Ramirez Professor of Practice, Policy, Research and Advocacy for the Latino Population at the USC School of Social Work with a second appointment in the Department of Sociology. He obtained his Ph.D. in Sociology at the University of California, Los Angeles.

A primary focus of his research has been on the relationship between substance abuse and violence and health issues among high-risk groups. His research projects have been among “hidden populations” such as youth and prison gang members, injecting and non-injecting heroin users, and sex workers on the U.S./Mexico border. Dr. Valdez is a recipient of numerous federal grants from the National Institutes of Health (NIH), National Institute on Drug Abuse (NIDA), Centers for Disease Control and Prevention (CDC), Substance Abuse and Mental Health Services Administration (SAMHSA). Two of his NIH funded grants focus on examining the long-term consequences of adolescent gang membership among Mexican Americans. Currently, Dr. Valdez is serving as the Primary Investigator on NIH/NIDA study examining substance use and floating immigrant populations between the United States and Mexico. He has also recently completed a NIH/NIDA-funded ethnographic study among active crack users in Mexico City. Dr. Valdez is also currently the principal investigator and Director of the Interdisciplinary Research Training Institute on Hispanic Drug Abuse (IRTI). He has published over 75 journal articles and chapters and academic publications including two books.